DMC Colombia  - Colombia is one of South America's hottest new destinations, it is no longer for just the adventurous amongst us. Blessed with vibrant cities like Bogota and Medellin with their soaring skyscrapers and colonial houses, it also has unspoilt mountains, and stunning archaeological sites. This beautiful country is enjoying a travel renaissance. Here you can visit elegant port towns such as Cartagena, spectacular national parks, and spend some leisurely time at beautiful Caribbean coast with an azure ocean. Cruise boats, street parties, late night salsa dancing and shopping galore make Colombia a not-to-be-missed destination. Until now, Colombia has received relatively few travellers in comparison with other South American nations, and visitors can expect a warm welcome from its people.

Further down the page: Read about our company * Travel facts Colombia. There is also a map of our country and our latest Colombia travel news.

This email address is being protected from spambots. You need JavaScript enabled to view it. 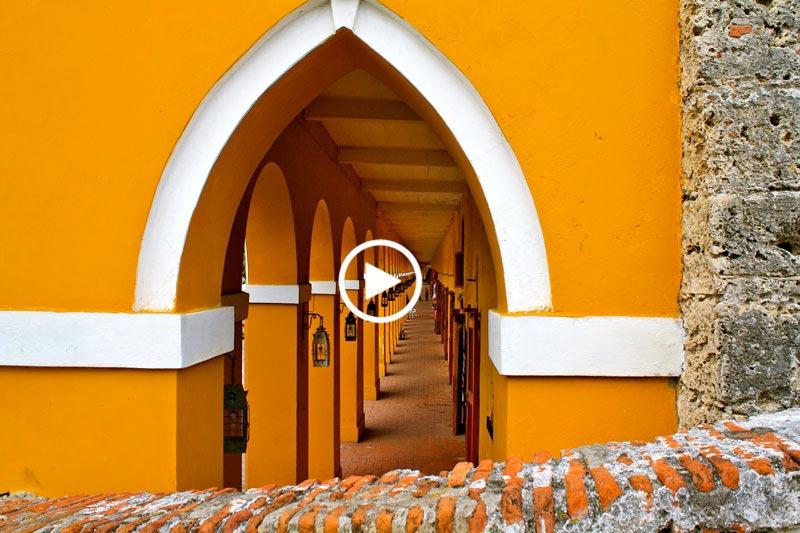 Bogota
Bogota is a teeming and vibrant city. Walking through the most historically charged plaza of the country gives pedestrians the sense of becoming part of history itself. Plaza de Bolívar is surrounded by the Palace of Justice, Capitolio Nacional, the Lievano building, which currently houses Bogotá's major City Hall, and the Primary Cathedral of Bogotá. In the center of the plaza you will find the first public statue erected in the city, representing Simón Bolívar.

Cartagena
Cartagena has perhaps the most beguiling and atmospheric colonial city in South America. It has a perfectly restored walled and cobbled centre, where flower-filled balconies decorate ornate facades, and a series of forts from a time when pirates ruled the waves. During the colonial era, this port was one of the most important of America because of all the gold and precious metal shipments departing from here to Spain. Naturally, the port was attacked by pirates several times, for which the city had to be build into a fortress.

El Rosario and Isla Majagua islands
Located one and a half hours south of the Bay of Cartagena, these islands have been declared a National Natural Park. You will fnd beautiful coral banks, populated with a great variety of reef fauna, white sand beaches and beautiful crystal waters.

La Ciudad Perdida
La Ciudad Perdida (Sierra Nevada de Santa Marta) - Deemed a World Heritage Site by UNESCO, the Lost City of the Tayrona people has not ceased to amaze archeologists and visitors since it was "discovered" in 1976 by a team from the Colombian Institute of Anthropology.

Salento and Valle del Cocora
Salento is one of the most representative towns of coffee landscape and culture. It preserves the typical architecture of the Antioquenian colonization of the middle nineteenth century and the customs of the local peasantry. Not far, is the Valle del Cocora, the cradle of the national tree: the wax palm. It is an ideal site for hiking or horseback rides followed by a meal of exquisite trout, the local dish.

San Agustin
San Agustín - A World Heritage Site since 1995, San Agustín housed several of the most important South American cultures, thus making this a significant archeological center of the continent. Hundreds of stone statues claim the territory where once a pre-Colombian civilization marked their tombs. On the outskirts of San Agustín one can find the Archeological Park, where most of the monumental statues can be found.

Tayrona National Park
Tayrona National Park (Santa Marta) - One of the most important parks of Colombia, this 15,000 hectare space - out of which 3,000 hectare is marine territory - contains over 350 species of algae and over 770 species of land plants. There are also archeological ruins left by the Tayrona civilization, which occupied the area from pre-Colombian times until well into the colonization.

All day excursion by boat to the Archiprielago del Rosario, located approximately one hour from Cartagena.

The national park is ringed by coral reefs and clear blue waters. It is the habitat for a large variety of marine fauna. Free time for snorkeling and relaxation. Lunch during the excursion.

The Rosario and San Barnerdo National Park is located in the Caribbean Sea, about 45 km to the southeast of the Bay of Cartagena and about one hour away by boat. The average temperature is almost 25 C.

This is one of the 46 national parks in Colombia and it was created to protect one of the most important coral reefs bordering the Colombian Caribbean coastline. The park covers 120,000 hectares and comprises the underwater shelf and the coral reefs to the west of the island of Baru. This reef that shields the Nuestra Senora del Rosario archipelago as well as the islands of Tesoro, Rosario, Mucura and Maravilla.

The native Indians of this area are descendants of the Caribbean people that were the first inhabitants of the Rosario and Baru islands in Pre-Colombian times. Later during the colonial period, the islands were populated by black slaves, brought from Africa. They dedicated their time to fishing and the gathering of mollusks. Today, these islands are a delight to visit because of its exclusive nature.

We offer DMC services for groups and incentives throughout Colombia.

We offer great value to our customers and thanks to our specialist product knowledge, an extensive product range and the highest standards in quality, customer service and security.

We are at your disposal for your next group, FIT or incentive - meeting in Colombia.